The Man with the Power 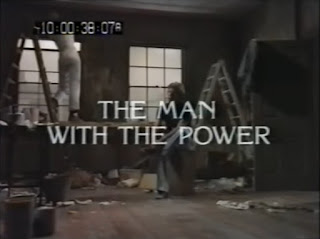 We've previously featured another episode from the 1976 BBC 2 Playhouse series 'The Mind Beyond' on Wyrd Britain with the episode 'Stones', a very enjoyable rural horror about a politician's dangerously daft plan to relocate Stonehenge to London's Hyde Park.

This episode, 'The Man with the Power', was written by Evan Jones (who also wrote oddball WWII football movie 'Escape to Victory') this is the story of builders labourer Boysie (Willie Jonah) who discovers that the 'second sight' he inherited from his mother is getting stronger when he remotely experiences his colleague's (Johnny Briggs - Coronation Street's Mike Baldwin) automobile accident.  Awed by his gift and by the various reactions of those around him he embarks on a spiritual quest that leads him to the Devil and beyond. 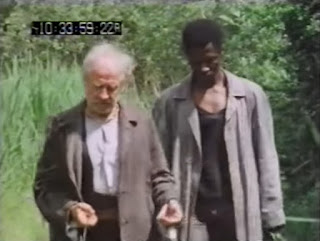 It's an odd one this.  Apart from a nicely twitchy turn by Geoffrey (Catweazle) Bayldon as a paranormal investigator and a show stealing appearance by Cyril Cusack as another sensitive the acting is pretty poor throughout with both Jonah and Vikki Richards, who plays his girlfriend Gloria, indulging in some serious scenery chewing.  The dialogue is clunky and the characters are pretty much universally unlikeable with Briggs' Brian (and others) spouting some dodgy 1970s racial politics.  There's an underlying theme of the responsibilities of power and the corrupting influence of material goods and a general gist that we are possibly watching the wilderness years of a new messiah but it's pretty clumsily done and the plot is generally unfocused repeatedly heading off in strange directions that are rarely fully explored such as Boysie's encounter with the old lady and the unexpectedly homoerotic turn that Boysie's ultimate meeting with the Devil takes.

But, with all that said, it did keep me watching; I just don't know why.

Did I enjoy it?  No, not particularly.  Would I watch it again? Maybe, but probably not.  Do I recommend it? Not really.  Yet, here it is.  Make of it what you will.

If you enjoy what we do here on Wyrd Britain and would like to help us continue then we would very much welcome a donation towards keeping the blog going - paypal.me/wyrdbritain
Posted by ian holloway at 11:49

Email ThisBlogThis!Share to TwitterShare to FacebookShare to Pinterest
Labels: BBC, supernatural, The Man with the Power, The Mind Beyond, TV Series