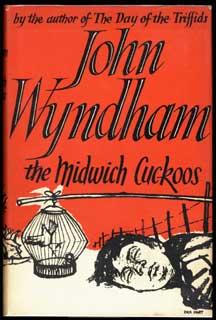 Published in 1957, 'The Midwich Cuckoos' was the fourth of John Wyndham's post war novels after 'The Day of the Triffids', 'The Kraken Wakes' & 'The Chrysalids'.

The book tells of the mysterious 'Dayout' suffered by the population of the town of Midwich and the subsequent discovery that every woman of child bearing age in the village has become pregnant.

Many people will be familiar with the story through the fantastic 1960 MGM movie 'Village of the Damned' starring George Sanders, Barbara Shelley and Martin Stephens as their fabulously creepy 'son', David.  Some of you may even know it through the risible 1995 John Carpenter remake starring Chrisopher Reeve.

The version below is a BBC Radio adaptation from 1982 starring William Gaunt (who played Richard Barrett in 'The Champions'), Charles Kay and Pauline Yates (perhaps most famously known as Elizabeth - wife of Reggie - Perrin).  The music is by Roger Limb of the BBC Radiophonic Workshop and could perhaps be described as not being his best work.

This one has been up for a while but the BBC has a habit of pulling these videos so it may disappear at any time.