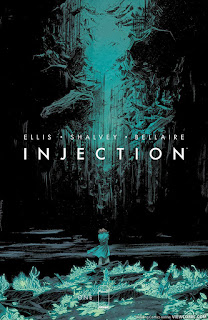 A few years ago, a public/private partnership between the British Government and a multinational company saw five clever people placed in university-owned offices and allowed to do whatever they liked. It was called the Cultural Cross-Contamination Unit, and the idea was that it would hothouse new thinking and new patents. Five actual geniuses, all probably crazy, very eccentric, put in one place and given carte blanche to think about ways to approach and change the future. What Could Possibly Go Wrong?
They did A Crazy Thing, which was referred to as The Injection. A mysterious Thing that they did in order to make the 21st Century better and stranger. It got out. It got loose into the fabric of the 21st Century, whatever it was, and now things are getting weird and ugly, faster and faster.
So a few years have passed. They've all gone their separate ways, into separate "jobs" that allow them to follow and sometimes deal with the repercussions of The Injection. We are in the period where the toxic load of The Injection is at such a level that events that are essentially paranormal in nature are coming faster and faster, headed towards a point where humanity won't easily be able to live on the planet any more. Not a Singularity of glory, but an irretrievable constant blare of horror coming too thick and fast for anything to deal with.

I love Warren's work.  I gave up on comics in the early 90s, sold off the majority of my collection and blew the money on... well, let's just say I blew the money.  About 10 years later having cleaned up considerably I picked up a copy of the first 'Transmetropolitan' book in a HMV in Cardiff.  After standing there reading for 10 minutes (it's quite short) I left with it and the next 2 volumes in hand.  It brought me back, somewhat, into the fold and I will sing his praises to anyone who'll sit still long enough to listen.  So, pull up a chair and let me tell you why this book is an absolute must for all fans of Wyrd Britain storytelling.

Those of you familiar with Warren's work, in particular, 'Planetary' (and perhaps 'Global Frequency') will recognise in 'Injection' his love of playing with genre archetypes, making them dance to the subtly different tune that the current zeitgeist is playing.

What we have is a team book which is, of course, a staple of comics and is a trope that Warren very much re-invigorated with his 'widescreen' superheroics on 'Stormwatch' and 'The Authority'.  Here though, as I mentioned earlier, it's his other, non spandex, team book that springs most readily to mind.  In that previous series his characters were dealing with the events and consequences of the 'fictions' of the 20th century.  They were investigating the genre staples that have defined modern tastes such as the superhero - both the pulpy variety and the grim and grrr version of the late 80s / early 90s - monster movies, noir, etc.  Here, his characters are concerned with an older and more deeply fundamental and, so far at least, decidedly British folkloric fictions;  they are accessing the stories behind the stories and are dealing with the impacts these stories are having on their lives and the country as a whole.

'Injection' tells of a 'team' of four very distinct people who make up the 'Cultural Cross-Contamination Unit', a governmental think-tank that takes it upon itself to avoid the predicted death of innovation and the entropic decay of the 21st century by injecting a non-biological consciousness into the physics of the world to "make the 21st century more interesting".  Part spell, part AI the consciousness or 'injection' begins to serve it's purpose accessing and utilising the folklore of the British Isles to add that extra spice that the CCCU were so keen on stimulating especially at the point we join the story as it starts communicating with it's creators.

The core (no longer a) team make for a pretty intriguing prospect.  A Holmes-esque investigator named Vivek Headland - immaculate, aloof and seemingly an utter control freak watching over his former comrades from his ultra-minimalist New York penthouse furnished with only a phone, a white devil, a very tall chair, a folding table and an inedible sandwich - Simeon Winters - a gadget laden super spy / assassin - Brigid Roth - computer whizz and creator of the aforementioned A.I. - Robin Morei - who is absolutely "not a fucking wizard" but is descended from a long line of cunning folk - and heading it all is "the only authentic genius most people will ever meet", Maria Kilbride who is trying very hard "to make up for a terrible thing she did".  They make for a very interesting quintet with Robin and Maria showing themselves to be, for me at least, fascinating characters as I'm always a sucker for an anarchic magician and a hard as nails rampaging scientist. 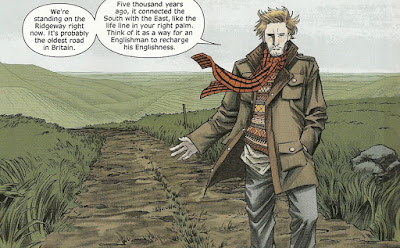 Obviously this is only the first 5 issues of a brand new series and Warren excels at teasing out his stories and keeping you guessing, hoping, wondering and hankering in equal measures.  As I said earlier I am a fan and I'll happily follow wherever he happens to take a story and this time out it's started in a place that rings every single one of my Wyrd Britain bells.  Like it's author, 'Injection' is steeped in the stories of the British Isles; the stories both ancient and modern that define that very British sense of the fantastical from the creatures of legend to the type of nightmares conjured up by an Etonian schoolmaster, from the detective fantasies of a Scottish physician to the pioneering scientist with his own Experimental Rocket Group and of an entire generation of post-war British authors who destroyed the world again and again and again.  This book bleeds them all but does so in a way that mixes them with Warren's voracious appetite for the new, the unique and the unorthodox and presents them alongside Shalvey and Bellaire's breathtaking artwork as a bold and beautiful re-invigoration that makes for an enthralling read.