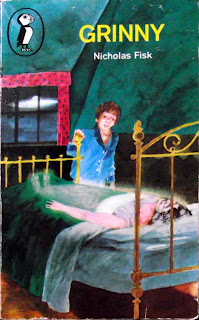 Great Aunt Emma is no ordinary old lady. But why is she so strange? For a start, she just appeared, grinning, on the doorstep, as if from nowhere. Why have Mum and Dad never mentioned her before - after all, she is supposed to be Granny's sister, isn't she?
Soon Tim and Beth start noticing more and more odd things about the great-aunt they've nicknamed 'Grinny'. And before long, they make a horrifying discovery. She isn't even human, she's as dangerous as a time-bomb and she has a fearful task to perform which involves them…

When Great Aunt Emma turns up on the Carpenters doorstep one morning they are surprised to say the least.  Not only by her sudden appearance but by the fact that they didn't even know she existed.  The adults come to accept her presence almost immediately but the kids remain sceptical as with her naivety of the obvious, her constant questioning, her total recall and her lack of any sort of smell she's a definite enigma.

Fisk's writing style gives 'Grinny' - at least until the finale - the feel of one of Joan Aiken's 'Armitage Family' stories with it's middle class, middle England setting littered with literary references from the likes of William Blake and with a lead character, Timothy, who shares a period 'Boy's Own' spirit with Mark Armitage.  It's through Tim's diary that the story is told and as such it's filled with a strange sort of chummy sexism that seems anachronistic even for the 1973 publishing date. Tim's bright but vengeful sister is in many way the central character in the plot as she uncovers much of the going s on and puts the lie to Tim's misogynistic witterings.

The resolution of the story is a little untidy and oddly unsatisfying in it's vindictive cruelty but I suppose considering the alternative it's justified and works to round off a brief but diverting read.

Buy it here -  Grinny: Grinny & You Remember Me