65 Great Tales of the Supernatural 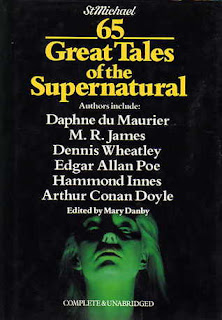 This powerful and comprehensive collection of 65 brilliant stories contains the best of all the well-known writers of the supernatural, both old and new, with some stories specifically commissioned for this volume.

I've grown to love these anthologies particularly the older stories which this mammoth tome has in spades.  It also features a fairly large smattering of (at the time of publication) modern writers.

Of the 65 here it's the famous that have been represented by their A-game pieces.  Robert Aickman opens the book with the sublime terror of his 'Ringing the Changes', E.F. Benson's 'The Bus Conductor' will be familiar to some from it's film version in the 1945 Ealing Films classic 'Dead of Night'.  M.R. James' 'Lost Hearts' makes it's customary appearance as does William Hope Hodgson's Carnacki classic 'The Whistling Room', Robert Louis Stevenson's 'The Body Snatcher' and Nigel Kneale's 'Minuke'.


Alongside these and other key authors such as Algernon Blackwood ('Keeping His Promise'), Ambrose Bierce ('The Middle Toe of the Right Foot'), Charles Dickens ('The Signal-Man'), Arthur Conan Doyle ('The Brown Hand'), Mark Twain ('A Ghost Story'), H.G. Wells ('The Red Room') and Dennis Wheatley ('The Case of the Long-Dead Lord'), editor Mary Danby has gathered an intriguing selection of lesser known authors such as Charles Birkin whose 'Little Boy Blue' is an affectingly grim tale of childhood friendship and Dorothy K. Haynes' intense and horrific hotel in 'Those Lights and Violins'.

Rounding out the collection is a selection of more modern storytellers such as Adrian Cole who does a Cornish Lovecraft (who's also here with his excellent 'Moon Bog') pastiche called 'The Horror under Penmire', Danby herself gives a nifty tale of well-deserved comeuppance with 'The Engelmayer Puppets', Roger Malisson brings the creepy, small town horror in 'A Fair Lady' and Tim Vicary's heart wrenching 'Guest Room'  is a real highlight.

Since it was published in 1979 (mine is a 1982 4th edition) this book has become a charity shop staple but please don't let that put you off as it really is a corking collection.  OK so maybe there isn't 65 'great'tales but there's certainly a large proportion of the freaky and the fabulous.  There's a couple of tales that are very much not 'great' but Danby has compiled a fairly solid collection and there's a great deal of macabre fun to be had here.
Posted by ian holloway at 13:17