Ask me what my favourite film is and you're going to get a list and a whole host of qualifying remarks; 'Amelie' because it's beautiful and poignant and lovely and funny. 'Dredd' because it's everything I wanted it to be. 'The Quiet Earth' because it has a crazy man in a dress holding Jesus hostage with a shotgun and I kinda named my record label after it. 'The Warriors' because they had nowhere to run so they came out to play. 'Tremors' because it's a note perfect pastiche of the old creature features. 'The Long Goodbye' because Elliot Gould. 'Singing in the Rain' and 'The Wicker Man' because one is the greatest musical ever made and the other is the most unlikely. And so it goes. 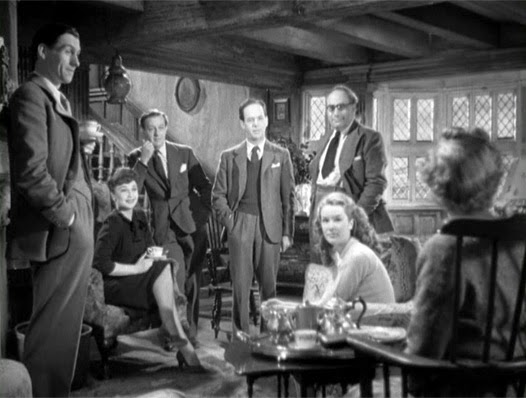 However ask me what my favourite horror movie is and you'll get one categorical answer, 'Dead of Night'.  Don't get me wrong there are others that I absolutely adore; 'Dawn of the Dead', 'An American Werewolf in London' and 'Frankenstein and the Monster from Hell' to name just three but above and beyond them all is 'Dead of Night'.

Made in 1945 by Ealing studios it was the first British horror movie made following the second world war and the British governments ban on making horror movies.  A portmanteau consisting of 5 ghostly stories told by the various party guests at a remote house; stories prompted by the arrival of architect Walter Craig (Mervyn Johns) who reveals that he has experienced this exact event before in a recurring dream. 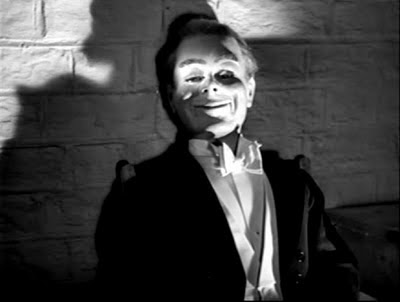 The 5 tales are of varying seriousness ranging from the frankly woeful golfing story (based on a H.G. Wells tale) through the initially frivolous but ultimately creepy children's party story, the fairly run of the mill bus crash tale (from an E.F. Benson story) with it's great pay off line, the chilling haunted mirror and above and beyond them all Michael Redgrave's turn as a deranged ventriloquist and the fractured psychosis of the movies finale.

It is the most British of movies.  It's filled with crisp accents and jolly, well mannered and thoroughly English people telling their simply ghastly stories and I adore it.

"Just room for one inside, Sir."