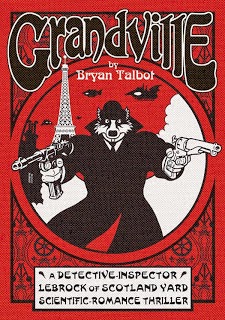 Grandville is set in a steampunk world, featuring steam powered motor vehicles, air transport, robots (known as "automatons"), telephones (known as "voicepipes") and televisions. In this world, Britain lost the Napoleonic War and was invaded by France. The British Royal Family were guillotined. Britain was later given independence from the French Empire following "a prolonged campaign of civil disobedience and anarchist bombings." Following independence, Britain became "The Socialist Republic of Britain". 23 years later, Britain is linked to the French Empire by the Channel railway bridge, and Paris is the biggest city in the world, known by the nickname of "Grandville". In Britain the English language is only spoken in rural communities, with the main language spoken in the country being French. The vast population in Grandville are anthropomorphic animals. Humans do exist, however. Having evolved in Angoulême, they are referred to by the French as "doughfaces", have never gained citizens' rights, and are considered menial workers. They are not allowed passports and so have never made it to Britain. The main characters in the series are Detective Inspector Archibald "Archie" LeBrock, a large, heavily-built badger; and his assistant Detective Roderick Ratzi, a monocle-wearing rat.

Brian Talbot has long been a favourite here. I'll get around to reviewing some of his related earlier work (the 2 Luther Arkwright books) at a later date. In the meantime here is the first of his series of anthropomorphic steampunk books - the very wonderful Grandville.

This first Grandville book concerns LeBrock and Ratzi's attempt to investigate the murder of a British diplomat. The investigation leads them to Grandville where they find themselves involved in a plot bigger than they could ever have imagined.

Anyone who has followed Talbot though the years will know that he is a consummate storyteller in both word and image. His plots are tight and plausible, his characters utterly human (or in this case, animal) and his illustrations perfectly paced and beautifully executed with a warmth to the art that radiates from the pages. The world of Grandville is sumptuously illustrated and beautifully reflects the opulence of the city with the world at it's feet. The technology is interwoven into both the storyworld and the narrative with seamless ease and in LeBrock and Ratzi we have two characters who are compulsive viewing. Ratzi in particular has become a firm favourite.

Even with all this going for it Grandville is a hard sell. Growing up reading comics funny animal books were always a particular dislike of mine and that view hasn't changed. Even knowing I would love what was inside it took me a small while to invest the necessary readies and take the plunge into it's covers. I'm certain I'm not the only one who shares this reticence for anthropomorphism. It is however a reticence that is worth putting aside (at least in the case of Grandville) as one soon forgets about the furry / scaly / hairiness of the participants and is swept along in the wake of a cracking whodunit.

Grandville really is something wonderful and worth both your time and your money. 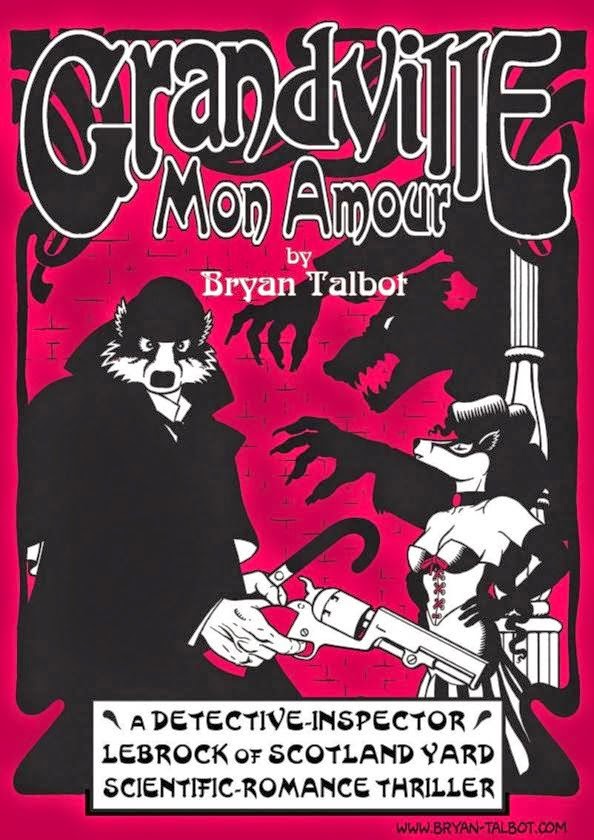 Convicted psychotic killer and extremist fanatic Edward "Mad Dog" Mastock violently escapes the guillotine's blade in the Tower of London to once again terrorise the Socialist Republic of Britain. But dogging Mastock's bloody footsteps is his longtime adversary and nemesis, Detective Inspector Archie LeBrock, at odds with Scotland Yard and intent on bringing Mastock's horrific murder spree to an end, once and for all. Aided by his friend and colleague Detective Roderick Ratzi, LeBrock follows the trail of carnage to Paris, otherwise known as Grandville, the largest city in a world dominated by the French Empire that is the prime target of Mastock's sadistic terrorism. Can LeBrock capture the Mad Dog before he can mete out his final vengeance, or will LeBrock's own quest for redemption be dragged to ground by the demons of his past?

This is the sequel to the fantastic first book in Talbot's anthropomorphosised steampunk series.  Detective Inspector LeBrock is back home after the events that led to the deaths of both Napoleon and his beloved Sarah.  He's in a bit of a slump having locked himself away and drunk himself into a stupor.  It takes his friend and partner (the frankly magnificent and dapper) Detective Ratzi to drag him from his torpor in time to investigate (unofficially) the escape of his old adversary Edward 'Mad Dog' Mastock who, having escaped from his execution in the Tower of London has headed for Grandville (Paris) and begins a murder spree against the cities prostitutes.  LeBrock and Ratzi soon discover a link between these killings, the escape and events that lead to the very top of the new British government.

As I mentioned in my write-up of the first volume I am a long time Bryan Talbot fan having read his work for pretty much as long as I've been reading comics.  This series is amongst his finest work.  It is stunning!  the characters are real, which is saying something considering the main characters are a gun wielding badger and a rat with a straw boater and a monocle.

It's unashamedly a pulp romp filled with ne'er-do-wells and heroes but that doesn't preclude it from being tightly plotted and filled with the most gorgeous eye-candy artwork.  As before it's a sumptuously realised piece of work that is as beautiful to look at as it is to read. 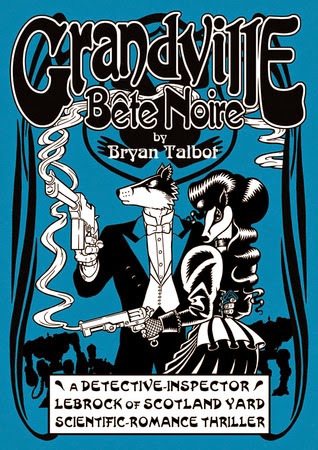 The Badger is back! At Toad Hall, lair of multibillionaire Baron Aristotle Krapaud, a cabal of industrialists and fat cats plot the violent overthrow of the French state by the intervention of horribly beweaponed automaton soldiers.
Meanwhile, the brutal murder of a famous Parisian artist, mysteriously stabbed to death in his locked and guarded studio, is subject to the investigations of the tenacious Detective Inspector LeBrock of Scotland Yard, placing him and his faithful adjunct, Detective Sergeant Roderick Ratzi, in pursuit of the mysterious masked assassin stalking the cut-throat commercial world of the Grandville art scene. Bete Noire signals the welcome return to anthropomorphic steampunk detective fiction of master storyteller and graphic novel pioneer
Bryan Talbot with the third stand-alone volume of the Eisner and Hugo Award nominated Grandville series. As the body count mounts and events spiral exponentially out of control, aided by his brilliant deductive abilities and innate ferocity, LeBrock battles against outrageous odds in this funny, high octane thriller, an adventure shot through with both high art and comic book references, a glorious illegitimate offspring of Sir Arthur Conan Doyle and Ian Fleming - with animals! Follow the Badger!

In the previous 2 volumes of Grandville LeBrock had dispatched the King of France an the then both his Chief Inspector and the Prime Minister.  This leaves him with a fairly large space where potential enemies could be in this 3rd volume. In actual fact we get LeBrock versus the middle class industrialists and their plot to overthrow the revolutionary government that has taken over France since the death of the king. And, we get a sneak preview of who is going to be the villain of the fourth book.

As with the first two volumes this was superb, maybe even better than the previous.

LeBrock is asked by his friend the French Chief Inspector to assist after the murder of an artist.  LeBrock is soon hot on the trail of the killer through the artistic community of Grandville (Paris) and also the abundance of machinery / robots that are suddenly all over the place.  He also revitalises his relationship with the feisty Billie who proves herself more than equal to him both intellectually and physically as she helps defend the barricades, alongside the always fantastic and very dapper Roderick Ratzi, whilst LeBrock is off tackling those at the root of the plan.

It keeps on getting better and better this.  Full of action and intrigue but with well defined characters who are becoming even more so as they reveal themselves on the page.