Hawkwind: Days of the Underground: Radical Escapism in the Age Of Paranoia 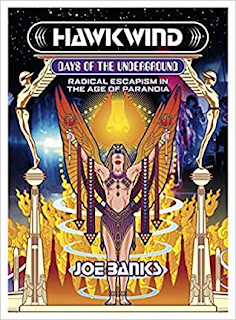 Joe Banks
Strange Attractor PressFifty years on the English rock band Hawkwind continues to inspire devotion from fans around the world. Their influence reaches across the spectrum of alternative music, from psychedelia, prog, and punk, through industrial, electronica, and stoner rock. Hawkwind has been variously, if erroneously, positioned as the heir to both Pink Floyd and the Velvet Underground, and as Britain's answer to the Grateful Dead and Krautrock. They have defined a genre—space rock—while operating on a frequency that's uniquely their own.

I've been a Hawkwind fan since my teens - it's just occurred to me that I'm wearing a Space Ritual T-shirt as I write this review - and, like I suspect many other Hawkwind fan, have long grown inured to the sniggers and the jokes that are often aimed at a band that has followed its own singular path and who, I maintain, had they been German would be lauded as musical pioneers rather than laughed at as sci-fi obsessed hippies. So with that in mind you can perhaps imagine my joy at the arrival of this big, beautiful tome that sets out to re-evaluate and reposition the band at the centre of the innovative and revolutionary musical underground where they belong.

There have been a few Hawkwind biogs in the past the only one of which I've read - 'This is Hawkwind: Do Not Panic' by Kris Tait - was one I picked up at a Hawks gig back in the late 80s.  Tait is married to Dave Brock and has performed with (as a fire eater) and manages the band and her book was a slim but engaging volume that was repeatedly devoured by younger me desperate for more info on this venerable warhorse of a band in those halcyon pre-internet days.  Published some 36 years later Banks' book covers much of the same ground but in substantially greater detail.

As seems par for the course with any indirect Hawkwind product there seems to have been no actual participation by Brock which does leave a fairly large hole in the narrative. I do though get the feeling that it isn't something that Banks was overly bothered by and indeed is often quite brutal in his treatment of Brock's temperament and later his lyric writing.

Many of the other familiar faces - Michael Moorcock, Nik Turner, Terry Ollis, Stacia and more - contribute short interviews that dot the book and provide interesting titbits that colour the chronology. Further to these Banks also litters the book with occasional essays discussing the band in relation to things like their relevance to science fiction, their wide ranging influence and their own mythology.

It's a fascinating read with its focus entirely on the 70s heyday from formation to the release of Levitation at which point it comes to a jarring and abrupt halt.  It's a book that is intentionally written for (and by) the devotee.  Banks' eye for detail of the various takes, versions and releases makes for an obsessive's delight and crammed with previously unseen photos and ephemera - not to mention the size of the thing - it proved to be a complete joy.  Here's hoping we get a follow up.

Affiliate links are provided for your convenience and to help mitigate running costs.
Posted by ian holloway at 14:19