Ghostland: In Search of a Haunted Country 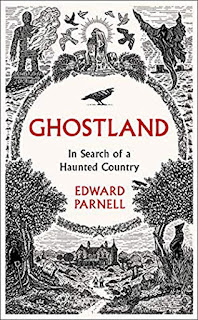 In his late thirties, Edward Parnell found himself trapped in the recurring nightmare of a family tragedy. For comfort, he turned to his bookshelves, back to the ghost stories that obsessed him as a boy, and to the writers through the ages who have attempted to confront what comes after death.
In Ghostland, Parnell goes in search of the ‘sequestered places’ of the British Isles, our lonely moors, our moss-covered cemeteries, our stark shores and our folkloric woodlands. He explores how these landscapes conjured and shaped a kaleidoscopic spectrum of literature and cinema, from the ghost stories and weird fiction of M.R. James, Arthur Machen and Algernon Blackwood to the children’s fantasy novels of Alan Garner and Susan Cooper; from W.G. Sebald’s The Rings of Saturn and Graham Swift’s Waterland to the archetypal ‘folk horror’ film The Wicker Man… Ghostland is Parnell’s moving exploration of what has haunted our writers and artists – and what is haunting him. It is a unique and elegiac meditation on grief, memory and longing, and of the redemptive power of stories and nature.

Parnell's 'Ghostland' is a Britain of dark and lonely water, of gothic churches standing sentinel over tumble down graveyards where a solitary crow caws a lament to the dead, it's one of ancient woodland's that are home to nature deities driven by mischievous natures and windswept coastlines beneath which whole civilisations have disappeared.  Essentially it's exactly the same as mine.

His book is an exploration of this haunted old country of ours exploring it's by-ways as a way of understanding the inspiration it has been for writers of the numinous such as Arthur Machen, MR James, William Hope Hodgson, Susan Cooper and Alan Garner amongst others.  Truthfully, for devotees of those authors there may be little new to learn but for each he teases out a nugget or two and for all he introduces and explores in an always entertaining style.

Alongside this he tells his own story and of the relationships and experiences that have accompanied his reading of those authors and which have shaped his life.  Straddling the line between nature writing and memoir this was for me the least effective aspect, not because it was poorly written or anything of the sort but simply because neither are literary endeavours that hold my attention for long; I've more interest in being amongst nature than reading about it and autobiographical texts tend to make me feel unpleasantly voyeuristic.

As a whole though Parnell has produced an engaging and thoroughly enjoyable exploration of the literary fascination that lies at the heart of this mouldy old run down land that will appeal to weird fiction neophytes and acolytes alike.

Buy it here -  Ghostland: In Search of a Haunted Country

If you enjoy what we do here on Wyrd Britain and would like to help us continue then we would very much appreciate a donation towards keeping the blog going - paypal.me/wyrdbritain
Posted by ian holloway at 15:41