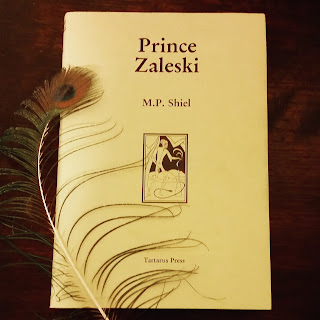 Arguably the most decadent of all fictional sleuths, Prince Zaleski relies upon the methods of ratiocination so beloved of Sherlock Holmes. But unlike his deer-stalkered colleague, Zaleski rarely needs even to leave his divan to solve the perplexing mysteries that Shiel brings before him. Rather than give crude chase to the perpetrators of these sophisticated crimes, Zaleski reclines elegantly in his semi-ruined abbey, ‘a bizarrerie of half-weird sheen and gloom,’ smoking hashish and fashioning solutions from his encyclopedic knowledge of the esoteric. Although he is in this respect akin to Edgar Allan Poe’s detective, Auguste Dupin, Zaleski is primarily an up-to-the-minute 1890s aesthete, prompting one critic to suggest that he is based on that tragically extravagant poet of death, Count Eric Stenbock.

My fascination with psychic / supernatural / occult detectives continues unabated and I've finally got my hands on one I've been coveting for some time.    As it turns out my understanding of it as being of that particular genre is somewhat in error as there are no supernatural elements here although within the world of the character there are a number of spiritual or mystic aspects.

Zaleski is a decadent savant who lives  hermit-like existence removed from society with only his servant, Ham, and his occasional visitor, Shiel, for company - at least in the three canonical stories; the other two and a bit stories introduce another character as a friend and frequent visitor.

In character the Prince seems most to resemble Mycroft Holmes as he is able, in the three stories, to deduce the causes and perpetrators of the conundrums Shiel lays before him, almost, without rising from his daybed or relinquishing his hookah although the third, and most esoteric, case does require subsequent actions that leave him exhausted.  Transplant his secluded home to the Diogenes Club and he'd be the heart of the British intelligence but Zaleski has no interest in the world outside his doors other than as a source of intellectual stimulation.

The final two and a sliver stories are purportedly written by Shiel but reworked by John Gawsworth and they present a very different character.  Written some many years after the initial trio the language and indeed the character are much changed.  Gone are the verbose, flowery monologues and the decadent ennui and in their place is a faster, almost pulpish, style with a Zaleski who is keen to not only abandon his seclusion but engage in physical confrontation which in neither case rings true of the man we've previously become acquainted with.

Aside from my slight disappointment at not encountering any supernatural shenanigans I was most pleasantly enamoured of the initial three stories - less so the others - and once I got into the rhythm of the dialogue I was happily drawn along by the mysteries.

As a side note, one of the things in particular that struck me was the ways in which Shiel's creation has impacted on one of our favourite writers here at Wyrd Britain, Mark Valentine, and his own supernatural sleuth, 'The Connoisseur'; in his manners and particularly by the mystery at the heart of the third story, 'The S.S.' (no, not them) which resonates with the DNA of Valentine's creation and serves to provide and extra smidgen of heritage to the younger creation and ancestral gravitas to the elder.

If you enjoy what we do here on Wyrd Britain and would like to help us continue then we would very much welcome a donation towards keeping the blog going - paypal.me/wyrdbritain
Posted by ian holloway at 21:41