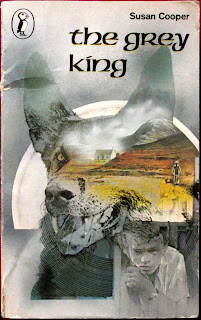 "Fire on the Mountain Shall Find the Harp of Gold Played to Wake the Sleepers, Oldest of the Old..."
With the final battle between the Light and the Dark soon approaching, Will sets out on a quest to call for aid. Hidden within the Welsh hills is a magical harp that he must use to wake the Sleepers - six noble riders who have slept for centuries. But an illness has robbed Will of nearly all his knowledge of the Old Ones, and he is left only with a broken riddle to guide him in his task. As Will travels blindly through the hills, his journey will bring him face-to-face with the most powerful Lord of the Dark - the Grey King. The King holds the harp and Sleepers within his lands, and there has yet to be a force strong enough to tear them from his grasp.

After the joy of the previous book in the series I had high hopes for this penultimate part of Cooper's 'The Dark is Rising' sequence. Young Will has come into his inheritance as an Old One and is secure and confident in his powers. So much so that he stood alongside the others to face up to the power of the Witch. Unfortunately as we begin this book an all too mundane illness has robbed him of much of this and he starts 'The Grey King' much the worse off.

As with the others in the series this is essentially a quest book. Will is once again tasked with finding and releasing an ancient magical force / entity that will aid in the fight against the Dark. As ever there are forces pushing against him.

Within all this magical malarkey Cooper has written a warmly human novel. The love and friendship experienced by Will during his convalescence / adventures in the mountains of West Wales make this a delightful read. The story is told with a deft hand for character and the keen eye for the fantastical which has helped cement this series as one of the modern classics of Wyrd Britain.

Buy it here:  The Grey King (The Dark Is Rising)

If you enjoy what we do here on Wyrd Britain and would like to help us continue then we would very much welcome a donation towards keeping the blog going - paypal.me/wyrdbritain
Posted by ian holloway at 14:59