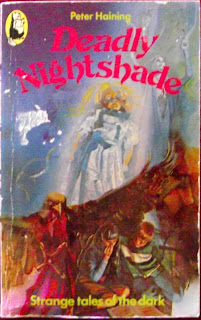 I'm making a concerted effort at the moment to work my way through as many of these little old anthologies as I can as they're getting buried on the bookshelf.  This latest one to make it's way off the shelf is one of a phenomenal number of these things put together by anthologist extraordinaire Peter Haining.

The main focus of this volume is children and each story features them centrally as either victim or, and far more satisfyingly, as perpetrator.  Most of the stories date from the very early 20th century with a couple from the late mid and features a nice variety of top notch names from both sides of the Atlantic.

So, in a book of kiddie-centric tales of the macabre and the supernatural there's one story that's pretty much guaranteed to feature and here it opens the proceedings, M.R. James' 'Lost Hearts'.  I've read this little tale of black magic and ghostly revenge a few times now and it's ubiquity can make it easy to overlook and it's easy to forget just how fantastic a story it is.

In 'The Dolls Ghost', American author Frances Marion Crawford takes his horror from the violent streets of London with a sentimental tale of a broken doll and a lost child before H.R. Wakefield, in 'The Nurse's Tale', runs us out to the country and embroils a young child in an ancient family curse in a ghost wood in a story that has been written with perhaps more effort with regard to humour than atmosphere.

Algernon Blackwood's 'The Attic' is an uncharacteristically sentimental, but rather lovely, tale of cat's, ghosts and loss whilst W.F. Harvey's 'The Dabblers' is maybe a little too M.R. James lite to be as creepy as I think it had the potential to be.

Cat's feature prominently in the next two tales also but in both cases in the transformative.  'The Tortoise-Shell Cat' by Greye La Spina is an uninspiring voodoo tale of metamorphosis and theft but it's followed by the sublime fun of one of Joan Aiken's Armitage Family stories.  In 'The Looking Glass Tree' a new and unpleasant neighbour moves in next door, does something unpleasant to the their cat and generally makes a nuisance of herself whilst the Armitage children, Mark and Harriet, take a step towards helping two characters from previous stories.

A vampire takes the centre stage in William Tenn's toothless but brief 'The Human Angle' before it's usurped by the fabulous 'Gabriel-Ernest', Saki's fairly ubiquitous werewolf tale.

Psycho's Robert Bloch tries a twist on the witch story by putting the magic in the hands of an abused child but Mark Van Doren's 'The Witch of Ramroth' is entirely too short and woefully unsatisfying.  And while we're on the subject of woeful neither August Derleth's native American shape shifting ghost of 'Twilight Play' or Anthony Boucher's murderous 'Mr Lupescu' would be worth revisiting.

The book ends with a strong trio of tales.  The first is by Conrad (father of Joan) Aiken whose beautifully odd 'Silent Snow, Secret Snow' relates a young boy's increasing detachment from those around him.  'Midnight Express' by Alfred Noyes which turns up occasionally in these type of anthologies and is maybe a little out of place here as the central character soon attains adulthood at which point a childhood terror is realised and closing the book is Ray Bradbury's horrific Halloween game in 'The October Game'.

In all Haining has here put together a delightful assemblage of the macabre, the ghoulish, the ghostly and the grim.  With only a couple of missteps (my opinion of which I suspect will be disagreed with by many which is part of the fun of these collections) he has compiled a most enjoyable read.
Posted by ian holloway at 18:40