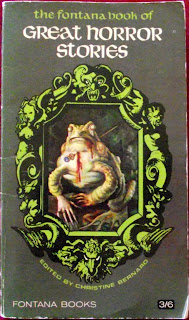 I jumped on this book when I saw it in a cluttered second hand bookshop in Cheltenham because of the Nigel Kneale story that I hadn't read before; I'd have bought it anyway but that was the clincher.  There were a few other firsts in there too so let's take it one story at a time.

Starting things off is 'The Squaw' by Bram Stoker and it's tale of feline revenge as a rather stupid American tourist is given a medieval comeuppance by a particularly angry she-cat.  I've only ever read one Stoker tale before - 'The Judge's House' - which I really enjoyed and this one was fun also.  I really must get around to reading that copy of Dracula that's sitting on my bookshelf.

Next is only me second experience of Robert Aickman.  I'd managed to entirely miss him and now I've read him in two books in a row - 'Ringing the Changes' in '65 Great Tales of the Supernatural'.  'No Stronger Than a Flower' is a quietly odd little tale of newly weds that sees the wife relenting to her new husbands comments regarding her appearance in a most odd and unpleasant way.

Hugh Walpole's excellent 'Tarnhelm' was one of three familiar stories here as a young boy is sent to stay with his two uncles only to discover that there's something quite unlikeable about one of them and he finds himself in serious danger.

The fourth story gives me my first chance to read an Agatha Christie story, 'The Gypsy' is a light but gratifying tale of premonition, fate and love wrapped up in a breakneck read that still manages to feel complete and satisfying.

Another anthology regular, Algernon Blackwood's 'A Case of  Eavesdropping', takes a young man to a boarding house where bumps (and blood) in the night are commonplace.

And so we arrive at the Nigel Kneale tale.  Kneale only ever published one non Quatermass book, a short story collection called 'Tomato Cain and Other Stories',  and it's from that his haunted house story 'Minuke' is the most anthologised so to get a chance to read another was a real treat.  'The Pond' is a short but sweet tale of revenge on a strange old taxidermist.

Roald Dahl provides a tale that is straight out of his 'Tales of the Unexpected' style with a story that mixes a dead husband, his newly liberated wife and some gruesome post-mortem science with the promise of some well savoured revenge.

L.P. Hartley's 'The Two Vaynes' is by far the poorest story here with large plot holes in a fairly pointless plot of revenge for a pretty slight leading to revenge for a larger crime.

The Hartley story is followed by longest piece as Ray Bradbury's 'The Next in Line' tells of a young woman's descent into madness in a small Mexican town.  It's beautifully written but I found it to be quite unsatisfying with a very poor finale.  My preference in a ghostly or weird story is for a British setting - or at the furthest European - so the Bradbury was a step outside my happy place but still an enjoyable excursion as what Bradbury I've read in the past was always very readable as it, mostly, was here.

Frank Baker's 'In The Steam Room' is notable only for it's narrators long list of possible deaths which do raise a smile but the story itself which sees a middle aged neurotic foresee a violent death inside a sauna is fairly innocuous.

The same can be said of 'The Interlopers' by Saki as two feuding Carpathian lords are trapped together in a deep forest giving them time to sort out their quarrel.

Of the final three stories one proved itself to be stylish but ultimately empty, the second to be slightly pointless and the final one to be an old favourite whose title I didn't recognise.

Elizabeth Bowen's 'The Cat Jumps' is a haunted house story without any actual ghosts as the new owners and their party guests at a house famous for the gory murder committed there become obsessed and bewitched by it's reputation .  Ambrose Bierce's 'The Boarded Window' continues this theme with a remembrance of the reasons behind a sealed window in a deserted log cabin.

The book ends with Joan Aiken's lovely little twisted tale, 'Marmalade Wine' that finds a walker chancing across the country home of a retired surgeon only for things to go horribly awry.

As I've mentioned in previous reviews I do have a love for these old (this one is 1966) anthologies and this proved to be a most enjoyable one.  The selection is admirably light on ghostly goings on and heavy on supernatural revenge and retribution and is very much worth hunting down for anyone with a love of the weird.
Posted by ian holloway at 13:44