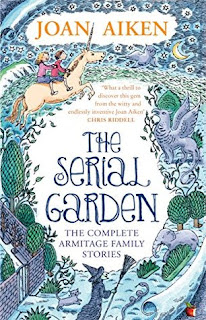 'I wish we'll have two children called Mark and Harriet. And I hope lots of interesting and unusual things will happen to them. It would be nice if they had a fairy godmother, for instance. And a phoenix or something out of the ordinary for a pet. We could have a special day for interesting and unusual things to happen - say, Mondays. But not always Mondays, and not only Mondays, or that would get a bit dull'

As a result of their mother's honeymoon wish, Mark and Harriet Armitage have a fairy godmother, a pet unicorn, and are prepared for anything life can throw at them (especially, but not always, on a Monday): hatching griffins in the airing cupboard, Latin lessons with a ghost, furious Furies on the doorstep, and an enchanted garden locked inside a cereal packet. Life with the Armitages can be magical, funny, terrifying - but never, ever dull. 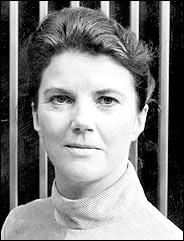 My first experience of Joan Aiken's writing was with one of her Armitage family stories - The Apple of Trouble - in a horror anthology called 'Ghostly Experiences' published by Armada Lion and it would be fair to say I was gobsmacked!  The story was sprightly, inventive, beautifully constructed and above all fun.  Since then I've been actively hunting for more.

Ms. Aiken wrote Armitage stories throughout her life (which shows in the changing preoccupations of the children - Mark in particular) and they were published in various anthologies over the years but until now the only collection has been a US edition from 2008 (with the same title) that was far too expensive for my pockets.  So, a few months ago when it was announced that Virago were republishing it I was a very happy chappy indeed.

Well, it's here and so the question must be asked, 'Was it worth the wait?'
And the answer is 'Absolutely!  It's utterly joyous.' 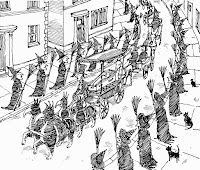 On the occasion of her honeymoon Mrs Armitage finds a magical stone on the beach and makes the wish in the blurb above triggering a life filled with dragons, ghosts, unicorns, old fairy ladies, owls, hippogryphs, furies, cereal packets, curses, troublesome fruit, goblins, warlocks and adventure mostly, but not exclusively, on a Monday.

The Armitages - Mark & Harriet along with their parents - inhabit a world where magic and the supernatural are as common as a homemade nuclear reactor, domestic robots and a fancy dress prize that consists of 'a hundred cigarettes and a bridge marker'.  Their village is populated both by the fantastical - the tiny little Perrow family and various 'distressed old fairy ladies' - alongside the tweely mundane of kids books everywhere - the blacksmith and the village shopkeeper.  As such the extraordinary is very much commonplace for the Armitages.  It's still fun, and occasionally a little annoying, but is very much just the way things are and this makes the whole thing marvellous. 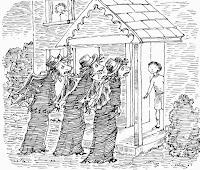 It's almost soap opera-y in it's slice of life snapshots but with a level of wit, imagination and fun that no soap could every achieve.  The characters are a little sketchy sure but this is a short story collection so do they need to be more?  The kids are adventurous, brave and resourceful, dad is solid and a bit fusty and mum is loving, kind and generous (and a little bit mercenary) and all serve to fill very familiar roles in what is a very familiar format; the kids magical adventure story.  It is Ms. Aiken's words that lift it out of any possible cliche though; her prose is elastic, her imagination dances and her audience is charmed.

The 25 stories presented here are fairly brief, staying just long enough to resolve their eccentric premises in often delightfully eccentric ways and together present a collection that offers a thoroughly enjoyable read that is very much of it's time whilst also being a book for all times.